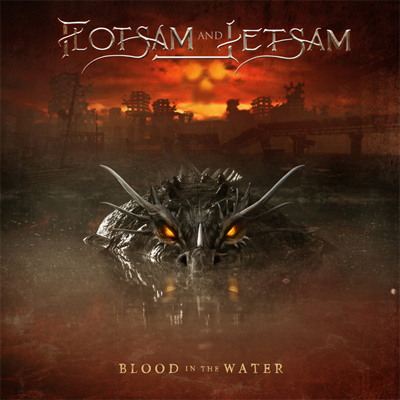 Ok, hands up. I am a massive Flotsam & Jetsam fan, so there was almost no chance I wasn’t going to love this. They are one of my all time top bands. I will try to be fair and even-handed here, but there will likely be a bias of which I am unaware. So… Let us begin…

One thing that really can’t be denied is that F&J have worked their asses off for the last few years. At the start of this century, they were putting out a new album every 5 years or so. Now the rate is consistently closer to one every two or three. Rather than mellowing with age, they seem to be getting heavier, too. The Cold and Ugly Noise were great albums for sure. However, from their self-titled 2016 full-length, they seem to have re-birthed themselves. They’re now livelier, thrashier, and much harder hitting; a band sounding twenty years younger again.

Just as The End Of Chaos cranked up the heavy dial from there, the same can be said, once more, for Blood In The Water. It takes a wide span of the band’s best features, and applies them with almighty power. A devastating culmination. I can certainly hear touches of When The Storm Comes Down, Drift, and Unnatural Selection. The magical combination of AK and Michael Gilbert is at its peak here. Nearly an hour of (mostly) brutal tracks, which will get completely stuck in your head. I’m making no bones about it. This is immediately one of my favourite F&J releases.

If there’s one thing I would have changed – and I’m really digging here – I would have maybe picked a different opener. The album as a whole is quite intense and technical, but the title track kind of eases you in gently. This is all overshadowed in realising this a high-point from a band people believed had delivered their final opus. Nothing could be further from the truth. Flotz have well and truly smashed it!

Grade: A+ (and accolades for the impact!)