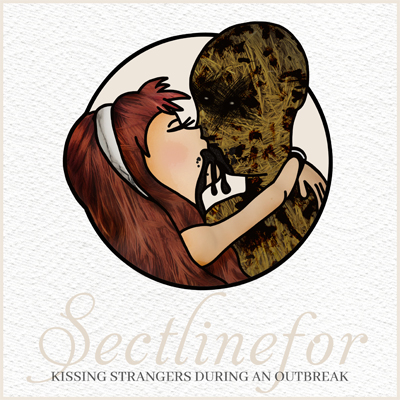 I… Um… Huh..? I think, unless they’re familiar with Sectlinefor‘s previous efforts, a lot of people are going to be lost here. Ok, a couple of parts are a bit more straightforward. However, the body of audio is a total mind melt.

I might call this acid industrial, but that’s only because I can’t think of a closer intoxicant. Hype? Krono? Slo-Mo? It’s a 3D, cartoon, cerebral explosion. Pitchshifter at their most digital smash into trip-hop At the Drive In, for an infamously bad ride on the Smiler. A sarcastic, neon, cluster bomb launched from Avatar Country. Suicide Squad rebooted by Oliver Stone. It’s absolutely cinematic – in a Requiem For A Dream kind of way – but, even after all those desperate comparisons, you’re still not there.

The lyrics themselves are from another place, seeming to spit in the eye of everything. They drip saccharine laced bile with a twisted smirk. “Someone call David Hasselhoff, pleeease“. “There’s a pubic hair in the bathroom and it’s really grossing me out!“. “A metaphorical shopping cart of emotion“. “Somebody found his pulse, it’s just running around the floor“. There are some personal highlights for you. It’s the vocal delivery which really nails up the hyper-glo Jesus, though. It runs the gamut from new romantic, to hardcore, returning via post-metal, and with a little something else lurking in the shadows. Often off kilter, always unhinged, it is a masterstroke of lunacy.

Kissing Strangers During An Outbreak is definitely art, and certainly memorable. I can guarantee it won’t be for everyone, but the last shake-up like this was probably Die Antwoord. You have to take it in to really understand.