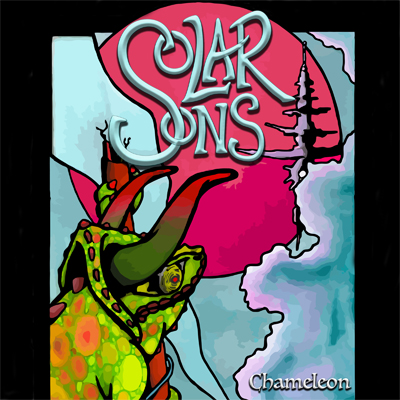 When it comes to Scottish metal, there are very few bands who nail genuine prog, and possibly none who do so as fluently as Solar Sons. They are rather prolific as well, with Chameleon being their fourth album in just five years.

This band has always been recognised as a strong blend of old school prog rock and traditional heavy metal. So it was on their debut, The Great Blue Divide, and so it is on Chameleon. I am never going to not hear Somewhere In Time era Iron Maiden in their sound. However, I am much less familiar with the other comparisons. I know the likes of Rush and Pink Floyd are dancing around in there, but to a metal ear, they aren’t quite as obvious.

Chameleon is possibly the least heavy of all four Solar Sons albums, though. Gallops and crazed solos still get their spot, but this is a pretty mellow collection, almost folky at times. Moving a little more into rock’s open-world territory, the trio put their creativity right out there. They never seem to be stuck for refreshing ideas. As is the nature of prog, the listener can also turn their head in different directions at any time, and always find something intriguing to focus on.

Retaining their crown as Scotland’s most proggy nwobhm band, Solar Sons have added some rather soothing tones to their canon, opening the gates of possibility. When live events are finally permitted once more, they are going to be armed with a formidable array of options. Keeping things identifiable and unique, while developing new angles, is tricky. Solar Sons have really nailed it here.