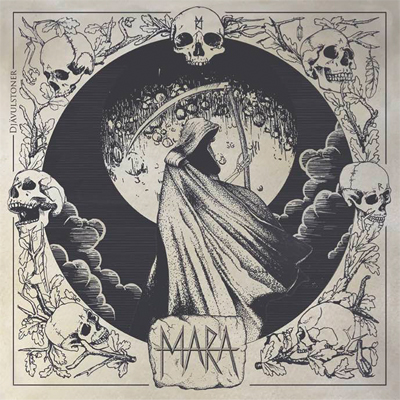 This Mara, from Gothenburg (not to be confused with others of the same name, for example those from Gävleborgs län or Gävle), have conjured up their own strange brew. A sombre heath of blackened, gothic metal provides the bleak landscape for Swedish and English lyrics. It has a quite the poetic nature.

Seeing them tagged elsewhere as melodic death metal just doesn’t sit right with me. Even their Usurpers To The Crown EP from 2014 doesn’t fit that bill, although it is a more standard debut metal release. One can easily hear on that record, as well as on Djävulstoner, that this band still has some love for traditional metal, such as Sabbath or Rainbow. It’s not too overt, but on quieter parts a 1970s metal-ballad vibe is hard at play. In delivery, this isn’t as twee as I may be making it sound, and actually adds to the artistic wholeness, allowing the heavier sections more space to do their thing.

They haven’t entirely lost the stoner-doom of their early days, though. It has simply given over a lot to dark atmospherics, a touch more extremity, and even a bit of thrash. Combined with an altogether more sinister gait, it comes across a bit like a side-project between The Blood Divine and Primordial. Again, one-hundred-and-ten percent not what comes to mind when someone mentions “melodic death metal”.

This is worlds away from where Mara began in 2012. Masterful and refined, it is everything an album should be, delivered from their own unique perspective. It would be nice to see them solidify this sound with a follow up album or two. I will certainly be keeping an eye out.