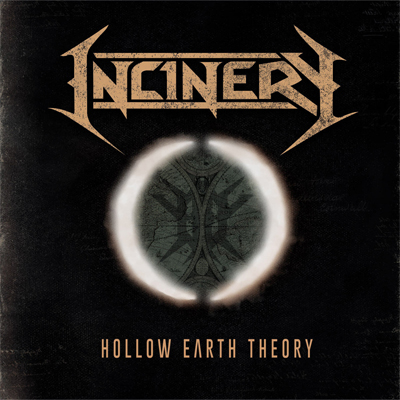 It’s been a little quiet on the Incinery front for a while. We haven’t had a whiff of a new release since 2014’s Dead, Bound And Buried. Now we see them return with a second full-length. Hollow Earth Theory won’t extract them from comparisons to pre-Low Testament, but they have certainly added some spice to their mix.

Whereas Pantera has been used to frame that differentiation in the past – and there is no denying a touch of southern US sound – it seems affairs have shifted towards Virginia, if you catch my drift. It is by no means overbearing, but it is noticeable. There is also a heavy sense of Megadeth, but not Rust In Peace, the standard by which many measure the thrash bar. No, this is more like a straddling of that era. The revved up punk of So Far, So Good… and the jazz technicality of Countdown… both sneak a tendril under the pure thrash metal armour.

Much of the time, quite rigid arrangements are employed here, nicely punctuated by an array of fiery Hanneman/Poland-esque leads. Coming straight from listening to a lot of proggy stuff recently, this was a bit of jolt. However, bearing out full tracks soon puts paid to that, and everything balances out, as more adventurous moments are spawned the further one listens.

As a whole, this album is reminiscent of the period in the nineties when thrash struggled with its birthing of a new, heavier breed of metal. A perfect parallel would be Face Down, former band of Marco Aro, who went on to front The Haunted. It’s a solid platter, but in some way it does feel like a tease of something greater to come.