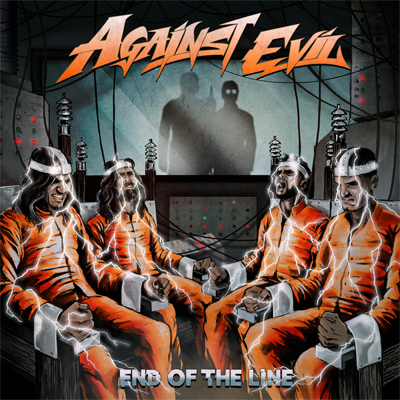 Against Evil deliver 100% old school, 80s metal, warts, hair and all. While it’s something we’ve certainly heard before, there’s just a feel to this sound which always grabs the metal heart. When it’s done well. On End Of The Line, that is undeniably the case.

Every chorus is just a bit catchy, and almost every riff is a hook. Much of this, at least to my ear, comes down to the guitar and bass combo, dishing out plenty of substance at all times. The “Angel Witch vs Testament” vocals don’t hurt, either. This Indian troupe don’t deal in meandering atmospheres, but impassioned, chunky numbers, which would be very much at home in the glory days of MTV. After Metallica broke the back of getting heavier videos accepted by public viewers, of course.

Think Dio, Anvil, W.A.S.P., and Skid Row, but a heavier, thrashier breed, and you won’t be too far off the mark. It actually gets quite brutal. In the early half, EOTL is a bit more glam, but then the hammer comes down hard for “part two”. The whole album is also littered with tasty leads, which tap right into that vibe. There’s a great, sweaty, nearly live energy coming off this release. The urge to headbang your way through a denim and leather club crowd is very real.

I have to say, albeit a standardised genre sound, this album is a delight. Against Evil really hit that birth-of-thrash spot, and I would love to see this on stage. Powerful without being extreme, and coming through like the real deal, this is to be recommended.