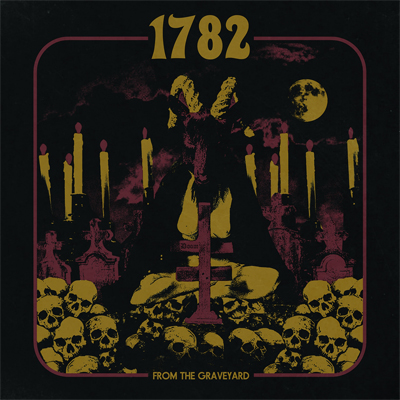 The cover art of 1782‘s second album kinda gives the game away. From the first track proper – The Chosen One – a wall of darkly psychedelic fuzz hits the listener, dropping them feet first into this Italian sect’s world of occult doom.

Overall, this is simply a mountain of super-saturated low end, playing backdrop to an echoing vocal sermon. The cthonic, sepulchral atmosphere is exactly what the band are aiming for. However, if your expecting dynamics and deviation, you’re not going to get it here. The main function is to pummel you into a hypnotic haze, and, on that front, this album never lets up. It is so narcotically languorous, that, in the right setting, it could be employed to religious effect.

Outside of the miasma of slightly disorienting, time-dilating drone riffs, there’s not much which can be conveyed via the written word. From The Graveyard is heavy, treacle slow, and simplistic. One would really have to try it out as a listening experience, and take the time to make their own decision. Personally speaking, this would be an infrequent indulgence, but I can certainly see its merits. I tend towards faster and/or busier material, but I’ll still reach for Black Sabbath’s eponymous track on occasion.

This is definitely one for dedicated doom heads only. That cross-section of music fans will find this the perfect soundtrack to putting their feet up and tuning out for a while.