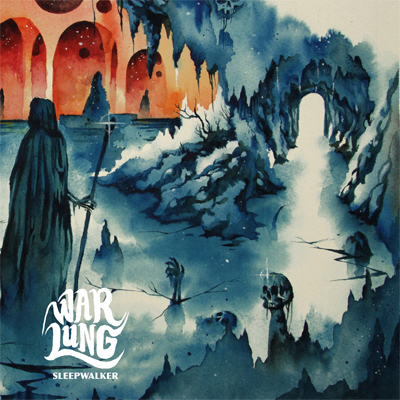 The final entry in our triple hit of “old but new” reviews this week, is Warlung. Possibly the least heavy of our trilogy, these Texans lean hard on proto-metal and classic rock. As such, they miss out a little of the aggressive drive of Victorius and Under The Oak, but they make up for that with rock roots swagger.

There’s not as much (later) Beatles in the mix here, as there is early Black Sabbath, but it is there, alongside so many other identifiable old school idioms. It has a certain late 60s atmosphere, and, with that, the geographical influences of the era; they sound rather British for a US band. I could easily see them slot right in beside Cream, Saxon, or Rainbow, their anachronistic contemporaries, as it were. That old time approach to iconic, killer riffs is a big feature on Optical Delusions.

That said, UK guitarists of that time didn’t hide their American influences in lead playing, and that stream flows through here as well. The likes of Page and Iommi are meandering around the fretboard, but so are Allen Collins and Leslie West (obviously influenced, in turn, by Cream). By and large, the band are heavier than this might suggest, but it really gives a strong, foundational understanding of what they are all about.

I do wonder if this will get overlooked in the current music scene, but it really shouldn’t. For me, there’s a special vibe in this music. I’d quite like to gather round a select few friends, somewhere remote, late at night, and crack open a vinyl copy.