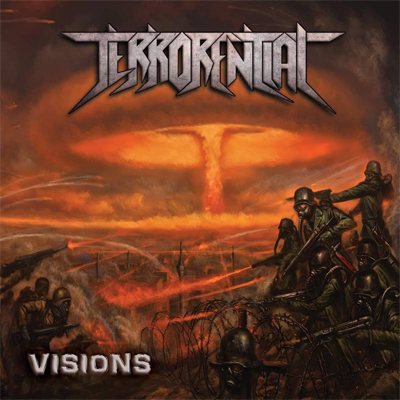 Immediately, and undeniably, Iron Maiden worship is hot on display from the very start of this album. Twiddling and galloping its way through the first track, it is entirely impossible to ignore. It never truly leaves, either, but, thankfully, it isn’t the only trick Terrorential have up their sleeves.

That much becomes apparent as soon as Larry Papura’s shredded death metal bark hits. In one stroke he transforms the nwohbm backdrop into one of 90s UKDM. It’s a clever switch, and the rest of the band aren’t far behind him, as This Mortal Coil weaves its way between the threads of Flash Of The Blade. You know the exact crossover point to which I’m referring here. It’s a very accurate portrayal.

So, initial preconceptions utterly smashed, onward we go. Visions doesn’t stop at the gates of death metal, either. There is at times a blackened edge, heavy thrash, and nods to Motörhead, Venom, and Dio. This three piece are simply in love with all the things which make real roots metal ‘metal’. Understated production and explosive performance help things along, but the smart creation is the big feature for me.

The way in which their influences twist and turn throughout this release makes Terrorential a real pleasure. Make sure you give it the time to get up to full power, though. It’s not what you might think to begin with.