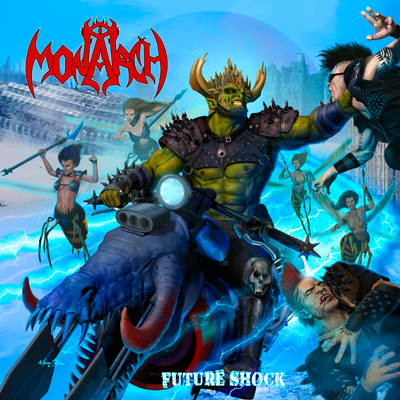 The first notes into Monarch’s upcoming album, Future Shock, really smack a sort of Bill & Ted soundtrack feel into your face. That’s not a dis. Both those OSTs have received many spins over the years.

However, it’s an interesting way to introduce a release which is pretty much pure, aviation grade, old school thrash. Not the ‘constant grinding away’ type. More the kind of original wave where you could still hear the music the creators grew up on; Sabbath, Maiden, Dio, Budgie, Venom and other more “rock” progenitors. It’s not quite as blatant or basic as Kill ‘Em All, for example, but it has a deep root in the same forest. There’s also a feeling that some of their more beefy concepts are drawn from teutonic regions rather than the UK or US. Think a little of Rage meets Destruction.

This all means that, as well as chunky riffing, there’s no shortage of melodies or classic-tinged shredding. In that same vein of musicality, the rhythm section is insanely tight. That ties everything together solidly, allowing for the vocal rasp to play around a bit more, adding a more extreme edge. Make sure to pay special attention to the bass, though. There are some incredible runs thundering through this release, occasionally taking it to the front as a strong feature instrument.

While Future Shock drops neatly into the thrash bracket, it is most assuredly at the most metal end of that spectrum. Not in heaviness, but traditional idioms. If that appeals to you, get this one cranked!