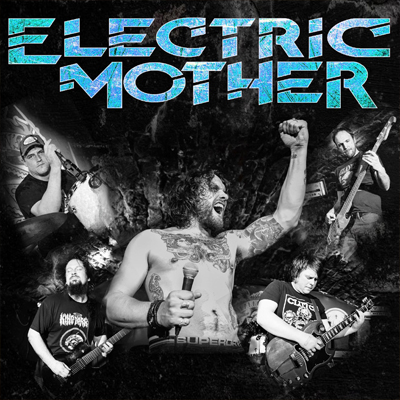 When you’re far removed from everything, away on the outer rim, things can get lonely.

It’s not for everyone. Sometimes, though, that distance and separation can lead to the creation of beautiful works of art. Towards the furthest flung end of Scotland, in the archipelago of Orkney, Electric Mother have been crafting a new album. Has their distant environment had sway over the end result? We put that question in a bottle, along with some others, and launched them into the ocean; Calum Elder and Rob MacGregor replied.

Calum Elder: I don’t think that we take that much influence musically from our surroundings, we have taken aspects from bands further afield and from different periods in time. Lyrically, there are certain nods to being beside the sea, such as in “Treacherous”.

From a non-musical perspective, however, it looks to have played a beneficial part. With the world more divided than ever, especially for those in the UK, their remote location seems to have prepared them for such hardships.

Rob Macgregor: Yes, I think it has prepared us immensely. Our island fortress has its pros as well as cons: Yes we can’t travel on occasion due to bad weather or whatnot, but at this precise moment neither can anyone else….there’s certainly a Isles mentality with regards to our current situation.

The first album from Electric Mother, Vol 1 kicks in with some pretty sleazy action.

I guess this is no surprise for a song called Gigolo. Things get a bit more sludgy/grungy as we progress, and it feels more like Temple Of The Dog, with, perhaps, a little smattering of Corrosion Of Conformity. It’s the comfortably lazy pace of those nudges which really carry through the character of this release. It would be a good partner to a long drive. Something to ease you along the road, while still keeping one foot in the heavy pool. As introductions go, this was a solid handshake, accompanied by an easy smile.

It’s hard, though, for an outsider to imagine much of a heavy music scene up there.

One certainly has to ask what it’s like being a hard rock band on a distant Scottish island. What is happening and who is there?

CE: Orkney is known for its traditional (Scottish) music more than anything, with a thriving folk scene in which many artists are renowned around the world. When we started the band, the only Rock bands were those who played cover songs in the pubs at the weekend. We wanted to buck that trend somewhat.

In the beginning we played a mixture of more obscure, heavy cover songs with a spattering of our own material. As we progressed we gained more of a following, wrote more material and gradually fazed the covers out. When we had enough of our own songs we began playing sets purely of our own, sometimes dropping in a cover here and there. The crowds seemed to stick with us, which was great.

I would like to think that this, accompanied with the introduction of the Orkney Rock Festival, has encouraged some other bands to follow suit and start writing their own rock material. There are a few good bands coming through on the rock scene, which is awesome to see and hear.

RM: There’s a few local band we gig with in Orkney; Angersay, Razormouth and Drones are our usual suspects. We also catch bands when we head up to playing Shetland, or, indeed, travelling down to the Scottish mainland. Because of our travel expenses local gigs generally serve as fundraisers for gigs “Sooth” (South, if ye dinnae ken – SD), while also letting loose new material and honing our set.

The melodically mournful vocals are expected and fitting, originating from the place where the connection between Celtic and Scandinavian is at its strongest. The wash of Americana, however, is less so. There is no shortage of repeating, hooky riffs and tonal leads, and the album definitely displays a throwback to old school hard rock, but framed around the likes of Alice In Chains and Pearl Jam. One might also sense a hefty nod to Helmet. Beef that up with a few scattered slabs of Sabbath worship, and you end up with II. Sometimes heart-wrenching. Sometimes energising. Always stacked with feeling.

It feels like there’s a more personalised sound on the new album. Certainly in the vocals. Was this an intended result?

CE: For this album we wanted to do it right and spend as much time doing so as needed (which ended up being A LOT!). We learned loads from recording Vol.1, which we are still very proud of. It gave us the knowledge of what worked and what didn’t when it came to making a more polished and professional sounding album.

That, paired with the experience, expertise and understanding of the sound we wanted from Eamonn Keyes (producer/engineer), allowed us to create and hone the album in the way we wanted. There was considerable time spent on recording each aspect of each track, which allowed for more room to get the biggest/best sound possible.

As for the vocals, it was far more of a focus than the last album, which for me was great.

It allowed for a bit of experimentation in areas and also gave me the opportunity to get the phrasing and melody exactly how I wanted it to be. All in all; it was a long, long labour of love. At times it felt like things were dragging, but in the end, we feel it was worth it.

So, although things may be harder for remote UK bands than their city-dwelling contemporaries, there are bands like Electric Mother out there, showing how it can be done.

RM: We are certainly more aware of more remote bands these days, technology plays a big part in that. Recording is much easier and can be done anywhere. Social media means you can search for just about anything and live streaming gigs can be done from the palm of your hand. Our immediate plans are to promote this second album, continue writing more music, eventually get back to jamming, rehearsing and eventually gigging!