With their second live album emerging over the horizon, Icelandic legends, Skálmöld, have released the third video for its promotion. Árás is one of the first tracks the band ever wrote. It harks right back to their debut record. The full album, 10 Year Anniversary – Live In Reykjavík, goes on sale via Napalm Records on October 16th, and is available for pre-order here.

Over in Switzerland, SNURFU are on a more heavy rock kick, with new single No Fucks Given. Six years after debuting with Play This Game, their second full-length, appropriately titled Round Two, is due out on November 19th, with more punk-flavoured, garage rock n roll.

Things get a lot more sinister as we head way over to Canada, for a video update from Uncle Woe. The meanderings of lead single, Be The Ghost, certainly present the intended reflection on death and dreaming. The album, Phantomescence is due out October 23rd via Packard Black Productions. Pre-order it here.

Those asylum-circus freaks in Ward XVI are on the loose again! Shadows, the final track from their album, The Art Of Manipulation, has just escaped among the public. Featuring the guest talents of Russ Custard (Footprints In The Custard), it is a dark and haunting closing statement. Play it loud for full effect!

October 23rd will see Noble Demon release Emptiness Weighs The Most, the fifth album from Red Moon Architect. The Finns promise to take the listener “on an intense and emotional ride through atmospheric, raw and melodic Doom soundscapes“. Check out their third single, Dethrone The Darkness, below.

Yet more doom is on the move; this time, from Belin’s Neànder. This four-piece make no use of vocals in their approach to slow, dark, and foreboding music. As you can hear from their track, Atlas, they are quite good at it, too.  This is the second single from Eremit, their second album, due out October 09th on Through Love Records.

Finally, we have all been hoping to see an end to ‘the plague’ which has left such a huge hole in our live music community. The earlier the better! Heilung are playing it pretty safe with next November/December, but who knows what the next few months will hold in store. This freshly announced tour is a welcome thought, though, with some classic European venues lined up, and support for most of the dates from Gaahl’s Wyrd. We really want gigs back on the cards long before then, but, as a worst case scenario, this is something to hold on to. 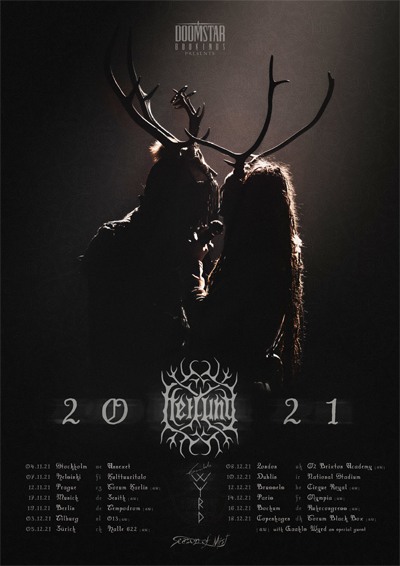