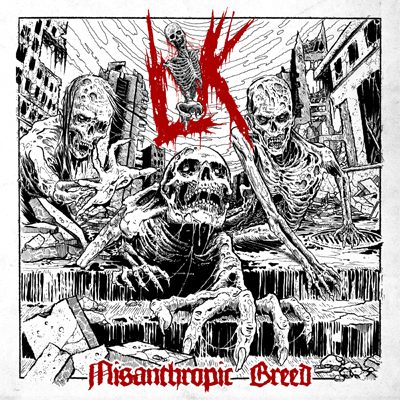 It seems like a crows age since the last album from Stockholm death metallers, Lik. However, they had an EP out only last year, an album the year before that, and even a split in 2017, with fellow Swedes, Uncanny. Well, it was certainly worth the ‘wait’.

On Misanthropic Breed, they have broadened the feel of their songwriting, and now incorporate more organic groove. Swedish death metal is, of course, well known for embracing some slow hooks, but in this instance it is something more of the band’s own creation. Other artists, such as Entombed and Bloodbath, have managed similar individuation very well. It not only sets them apart from their contemporaries, but serves to amplify the effect of more jagged, speedy passages.

This is the first of Lik’s three albums to feature the talents of bassist Joakim “Myre” Antman (although he did perform on 2019’s STHLM Death Metal EP). It seems he may have brought in both slightly more melodic sensibilities, and rock solid, traditional rhythm experience. He has certainly made his mark. The creation process of the band, as a whole, appears to be given over more to letting the songs come into being, rather than trying to make them happen. All the old energy is there, but pulses through with greater ease. This development also lends a darker tone to proceedings than on previous releases.

It’s a beautiful thing when a band you already like hit this stage of progression. This album deserves to become a death metal classic. Lik set about this recording “with the ambition of kicking the older albums’ asses.”. Well, that you have, guys. That you have.

Grade: A+ ||Distinction for improvement of the groovement