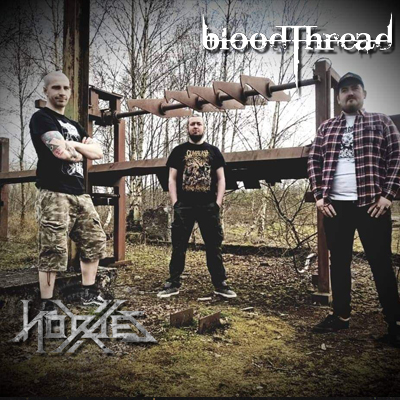 Often times, bands don’t just play Hordes X. They become family. And just like family, it doesn’t matter how much time passes between get-togethers, they’re still part of your world. This much can certainly be said for Tony Mitchell and his tech-death outfit BloodThread. Let’s reflect…

Tony Mitchell (guitars/vocals): “I think it was 2016 (last time we played Hordes). Great lineup, Centrilia, Iron Altar, Satiracy. Belters a plenty. We love playing Dundee, as it’s somewhere we don’t get to nearly often enough. Beat Generator is a solid venue, too. Love the double stage. No breaks between band style set up, just means you need to get the pints in quick!“

On their return to our yearly shindig, we see a stripped down band, now with only three members. How has that impacted their writing process, and, indeed, the overall Bloodthread sound?

Tony: “To be honest, the workload is more, now, with less bodies to split up the tasks, but we’ve managed to really hone our writing style to the 3 of us, and the pace has upped massively because of it. Somehow (if you include vocals) we have more instruments with the 3 of us, than we did with 5. A bit of tech wizardry let’s us run double guitars from 1, and we now wield dual vocals between Tony & Briggsy, in case you needed someone else to shout at you. Guarantee it’s the biggest racket you’ll hear out of three bodies.”

After seeming to leave the stage for quite some time (plus the influence of “you know what”), Bloodthread look to have come back blasting on the live front. However, it seems it wasn’t as voracious an assault as you might have believed.

Tony: “As much as lockdown threw a massive spanner, and everyone was keen to come out swinging, we opted not to.“

“We wanted to refine our new material, and make sure the wait was worth it. The unexpected break gave us a chance to write like crazy, and really progress our songwriting. New tunes & lineup, new sound. Beefy. We’re just fresh out of Belterfest in Glasgow. It was a fucking riot! We’ve had a few shows in the central belt to brush away the cobwebs. Hordes included, we’ve got a few all-dayers lined up for the rest of the year, that should be announced any time now. Feels good to be taking bookings again that are no longer likely to be postponed… That word still geez us the boak.“

Back in 2017, Dumfries based tech-death metallers, Bloodthread unleashed this little monster. Let’s take a look back.

This was some time for Tony Mitchell’s mental mob. Not only did they put out a fairly impressive short-player, but, within that same year, they had gone on to win Metal 2 The Masses, and play Bloodstock. I actually remember working with them on getting the word out about the release. Instantly upon hearing it, I was grabbed by the intensity bursting through the riffs. This thing was beefier than a big bag of bear bollocks when it came out, and that still stands true. There are more moments of earth-scraping simplicity than the soaring intricacy I seem to recall. Live, Bloodthread may be better known for the latter, but they are masters of primordial essence to boot. It will certainly be interesting to hear how they have progressed when their next material surfaces.

As he mentions “new tunes”, we have to poke the bear. If you look at the release date above, you can see it’s been a while since anything was put out under the Bloodthread banner. Is a new EP, or even album, on the horizon? And if so, what has been going into it?

Tony: “Covid times = home studios, between shouting at laptops, and working with Dave at Circa ’16 studios. We’ve got a new single that’s been ready forever, but as yet unreleased to the masses. We’ve played it live a few times, and heard it’s a crowd favorite, “Get in the Bin.” A select few stations have been lucky enough to receive a copy for some airplay soon. We’ve also got another few tracks in the works at the moment, the majority of which will be in our set at Hordes.”

So while it doesn’t sound like a long-player is quite on the cards, you can catch all their freshest carvings in Dundee. Maybe some advance warning of how it’s all going to go down would be nice…

Tony: “Take a deep breath, put a finger in your orifice of choice, and get ready for some homebrew, Scottish, extreme metal. Expect songs about chicken wings, bins full of bodies, and torture! Heavy with a touch of heavier!!!”

Get your Hordes X 2022 tickets right HERE and right now!